A report of the results of clinical study of the biologically active peptide bioregulator of brain origin:

The biologically active peptide bioregulator Cerluten® contains a complex of low-molecular peptides with molecular weight up to 10 000 Da, isolated from CNS of young animals – calves aged up to 12 months.

Cerluten® is manufactured in the form of capsules with a content of active substances of 10 mg.

Experimental studies have shown that the peptides possess tissue-specific action on the cells of the tissues from which they were isolated. Cerluten ® peptides regulate metabolism processes in the brain cells, increase brain safety margins, having a favorable effect on the organism adaptation processes in extreme conditions, the possess anti-oxidative properties, regulating peroxide oxidation processes in the brain cortex. So it is possible to extrapolate an efficiency of administration of Cerluten ® for restoration of the function of the central nervous system and its disorders of various origins.

Treatment of central nervous system diseases is of specific urgency, because they lead to social adaptation disorder and invalidation of patients (2).

Now the treatment of patients with disease of central nervous system diseases in view of pathogenetic mechanisms is carried out using the following traditional therapeutic agents of various action types: (1, 3)

The clinical studies of Cerluten® were carried out at the Medical Center of the Saint Petersburg Institute of Bioregulation and Gerontology of the Northwest Branch of the Russian Academy of Medical Sciences in 48 patients with various diseases of central nervous system: long-term effects of craniocerebral injury (the prescription of the injuries was from 1 year to 10 years), state after stroke, vascular encephalopathias, decrease in mental capacity, memory, attention during the period from October 2003 till February 2004. Distribution of the patients by clinical entities, sex and age is shown in the table 1. The patients of the main group have been taking Cerluten® in addition to the general purpose medicines – 1-2 capsules, 2-3 times a day before meal for 10-20 days depending on intensity of the pathological process.

The control group consisted of 37 similar patients, which have only general purpose treatment.

All the patients have been taking symptomatic and pathogenetic drugs, these drugs have resulted in short-term therapeutic effect, which required increase in a dose of the drugs per treatment course and duration of their administration.

After administration of Cerluten® in patients of the main group the clinical result was observed in 64.6% of cases, satisfactory – in 22.9%, absence of positive effect – in 12.5% of cases (control group – table 2). There were no negative influences of Cerluten on a condition of the patients.

Cerluten ® efficiency in patients with diseases of central nervous system

At comparison of subjective parameters of t condition of the patients before and after use of Cerluten® it was established that the number of health complaints was 2-3 times less. The patients have noticed memory impairment, intelligence impairment, decrease in intensity and duration of headache, emotional disbalance, endurance and stamina, feeling of rest after night sleep (table 3).

In patients with consequences of craniocerebral injury and stroke there was a moderate regression of focal symptoms, improvement of speech function at motor and sensor aphasia, decrease in muscular spasticity.

Influence of Cerluten® on subjective parameters of the state of health of the patients.

# Р < 0.05 in comparison with the parameter in patients before treatment.

#Р<0,05 in comparison with parameters in the group of patients after treatment using general purpose medicines

Assessment of Cerluten® influence on bioelectric activity of the brain was carried out using visual analysis of EEG with distribution by types and calculation of alpha index before and after the treatment. EEG was carried out selectively to the patients with more expressed signs of pathological processes. The examination results are shown in the table 5.

Patients after treatment using Cerluten® had most intense changes of brain bioelectric activity. Is was seen on EEG first of all in the form of more clear modulation and restoration of zonal differences of alpha-rhythm, decrease in intensity of irritative processes, in some cases – elimination of paroxysmal discharges.

On the basis of the data received it is justifiably to draw a conclusion that activation of reserve capacity of the brain cortex using Cerluten® helps to improve integral functions of the brain.

Thus the results of clinical study testify the efficiency and expediency of use of Cerluten® for complex treatment and prophylaxis of the diseases of the central nervous system of various origins.

Cerluten® does not result in side effects, complications and drug dependence; there were no contraindications for carrying out of clinical studies.

Cerluten® can be used for treatment and prophylaxis, including in combination with any means of symptomatic therapy, used for neurological practice (vascular, nootropic, resolving, anticonvulsants, vitamins etc.)

Cerluten® is recommended for acceleration of restoration of the brain functions after the craniocerebral injury, stroke, intellectual disorders and the influence on the organism of various extreme factors. It’s also indicated to elderly people for maintenance of the mental capacity.

It may be desired to have one more course in 3-6 months.

There are no contraindications and side effects for Cerluten® administration. 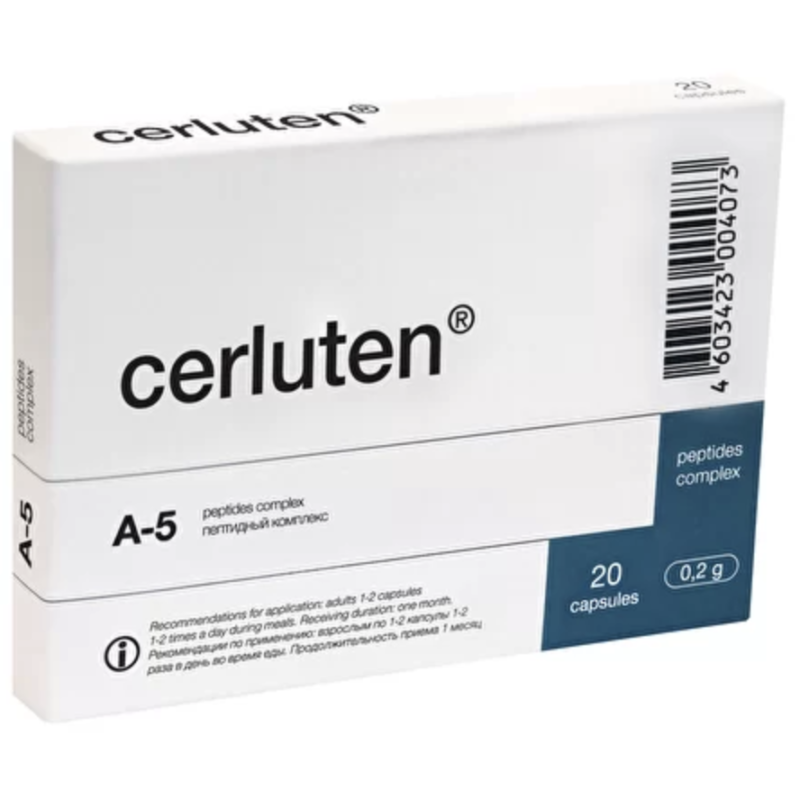