BEC 5 The treatment of choice for non-melanoma skin cancers

The laws of nature may be considered as; “the forces and processes that produce and control all the phenomena of the material world.”

The sun is a major force in nature and is essential for life on earth, unfortunately the sun also produces some unwanted side-effects for humans.

It is fashionable to have a suntan and people feel that exposing their skin to the sun is a healthy, pleasant thing to do. However, the sun also has a “dark side” in that, the ultraviolet part of the electromagnetic spectrum produced by the sun as light, in particular U.V.-B (290-320nm), is responsible for producing long-term solar skin damage (keratosis) and skin cancers. In fact, skin cancers are the most common malignancy in humans.

Curaderm-BEC5, is a topical cream preparation of a mixture of the glycoalkaloids solasodine glycosides (BEC). BECs are present in some solanaceous plants, including edible plants such as Solanum melongena (otherwise known as eggplant or aubergine). Now, BEC is available to the public for the treatment of cutaneous solar keratosis, basal cell carcinoma (BCC) and squamous cell carcinoma (SCC).

This communication gives us some insight how, on the one hand, nature through one of its major forces- sun light, is causing increasingly higher incidences of human skin cancers but, on the other hand, nature, also with the involvement of sunlight and plants has supplied the solution on how to eradicate these skin cancers.

The etiologies of keratosis, BCC and SCC, their currently available treatments, and the particular attributes of Curaderm-BEC5 within these concepts of pathogenesis and therapeutics, are presented in this article.

A BCC is a malignant tumour that rarely spreads to distant sites (metastasises). It starts in the basal layer of cells, between the basement membrane and the subsequent layer of cells and grows upwards from these. It consists of immature cells and has an organized complex of supportive tissue around it. The primary cause of BCC is sunlight exposed onto sensitive skin. Contributory causes are radiation damage, exposure to arsenic, burn scars and vaccination marks. BCCs are the most common malignant skin tumours in humans; they do not spread by metastases, but they erode tissue, and if not treated may eventually kill. BCCs may appear in a variety of guises and on first appearance, they are commonly small, rounded lumps with a pearly edge, and a thin surface covering with a few superficial transparent blood vessels. BCCs may also appear as ulcers, or as bleeding or non-healing lesions. Occasionally they appear as flat diffuse crusting or scaling red lesions. BCC tumours usually grow slowly but in a relentless manner. They then ulcerate and the ulcer will follow the spreading tumour, causing further damage, (for this reason they are also known as rodent ulcers).

An SCC is a malignant tumour arising from the cells above the basal layer of the epidermis (prickle layer), usually after many years of exposure to sunlight. The cells in the prickle layer are maturing towards keratin formation and the cancer occurs when they accelerate in growth and breakthrough the basement membrane into the dermis. Although sunlight is the most common cause of SCC, any cancer-producing substance (carcinogen) may initiate its development. SCCs often arise from precancerous conditions such as solar keratoses. SCCs may also develop from skin ulcers, scar tissues, and x-ray damaged tissues, if this occurs then the chance of metastasis increases to approximately 20%. In addition, some 40% of transplant patients who are on immunosuppressive drugs develop SCCs within 5-years post-transplantation. This skin cancer is a serious problem and is potentially deadly. The first sign of an SCC is usually a thickening, with the lesion feeling firm, and the limits are not discrete. In the early stages there may be a crust that may later shed to show an ulcer. It may also form as a crack (fissure) or a small ulcer on the lip, which fails to heal and bleeds recurrently. The SCC may metastasise with an incidence of generally less than 5%.

There are various surgical techniques available to treat skin cancer in its various forms. Surgical excision of a tumour has the advantage, that if done correctly, removes the affected area virtually completely. This treatment is extensive, requires anaesthesia and depending on the tumour, may require skin grafting with its accompanying cosmetic limitations. The risks of surgical intervention are well known and excision of BCCs or SCCs from the facial area often involves reconstructive surgery, which can be both time consuming and costly.

Radiotherapy, moreso prior to the 1950’s than now, has been used to treat most skin cancers. The disadvantage of this mode of treatment is the resulting scar tissue which may be depressed, depigmented and may also undergo degenerative and malignant changes at a later date.

Dermatological treatment consists of curettage and diathermy/ cauterisation, cryotherapy, chemosurgery and chemotherapy, and is generally used for superficial skin cancers. With curettage and diathermy, the tumour is scraped out and the bleeding stopped by cauterisation, (application of heat) by an electric current (diathermy). Cryotherapy, possibly the most widely used method, involves an intensely cold probe, cooled by liquid nitrogen, which is applied to the lesion. When the lesion thaws, there is pain in the treated area, followed by blister formation. Chemosurgery involves chemical fixation of the lesion and the fixed tissue is shaved off in layers. Chemotherapy with 5-fluorouracil (5-FU), which is an anti-metabolite and inhibits RNA and protein syntheses leading to cell death, is used to treat superficial lesions, but it is not specific for cancer cells. 5-FU is supplied as an ointment and requires considerable care in its application under medical supervision.

All of the above methods (surgery, radiotherapy and dermatogical) have their own individual limitations. However, the limitations common to all of these methods are:

1) Formation of scar tissue.
2) Lack of normal tissue regrowth.
3) Limited access to the lesion if it is deep within the skin.
4) A high rate of recurrence.
5) Cosmetic end result.

It is now well established that specific glycoalkaloids from the Solanum family have anticancer properties. The specific glycoalkaloids consist of BEC, which is a standardised mixture of triglycosides, solasonine and solamargine and their corresponding di- and mono-glycosides (1-12). All the glycosides contain the same aglycone, (the alkaloid without a sugar molecule)- solasodine.

Solasodine on its own does not have anticancer properties, however the mono-, di- and triglycosides do have anticancer properties. These glycosides contain a plant sugar rhamnose, which is not usually found in mammalian species. Specific endogenous lectins (EELS), which are specific receptors for the sugar part of the glycoalkaloids and are present in the plasma membranes of susceptible cancer cells but not normal cells recognize and bind the sugar rhamnose of the BEC glycoalkaloids. BEC subsequently enters the cancer cell and causes cell death by destroying the lysosome (6, 13-17).

BEC has been shown to have antineoplastic activity in cell culture, animals and in humans (1, 3-12). Currently Phase II studies with BEC are being carried out on terminal internal tumours in man. With these studies BEC in being administered intravenously (18).

A cream formulation of BEC in concentrations of 10% was well tolerated in an open tolerance and dose-finding Phase I and II studies in healthy volunteers and in patients with actinic keratosis, BCC and SCC (3). Application of the cream in this study resulted in swelling of the BCC and SCC lesions, with erythema (reddening) of the surrounding skin, then ulceration in about 2 days, followed over the next weeks by healing with healthy new cell growth. The only reported adverse events were mild itching and burning sensations at the site of the lesions in a few patients.

In another open study with 72 patients, their treatment with a cream formulation of BEC 0.005% called Curaderm-BEC5, resulted in the regression of all treated lesions (56 actinic keratoses, 39 BCCs and 29 SCCs), with 100% healed after 1 to 13 weeks of treatment (9). There were no lasting therapeutic effects in the 14 patients who received placebo.

It is important to note that Curaderm-BEC5 contained extremely low concentrations of BEC (0.005%). One tube of Curaderm containing 20g of cream formulation contained the equivalent of BEC as 5g of eggplant fruit (19). However, for BEC to be effective it must first be purified from its source by a specific process. Unlike other extracts used for therapeutic effects, in which the active ingredients have to be concentrated, with Curaderm-BEC5 the active ingredients in the plant material have to be diluted to still obtain the anticancer effects. In other words, the active glycoalkaloid ingredients are extremely safe as Curaderm-BEC5 contains less glycoalkaloid than the edible eggplant fruit!

Curaderm-BEC5 is applied at least twice daily to the skin and may be applied much more frequently if rapid regression of the tumour is required. Some patients apply the Curaderm-BEC5 cream up to 10 times daily. The cosmetic results after using Curaderm BEC5 are very impressive and over 80,000 patients have now used Curaderm-BEC5 successfully.

Recently a double-blind, vehicle-controlled (placebo), randomised, parallel group study of 94 patients was carried out to assess the efficacy and safety of Curaderm-BEC5 in the treatment of patients with BCC. This was a multi-centre Phase III study involving 10 centres in the United Kingdom.

The centres were as follows:

The objectives of the study were to evaluate the efficacy and safety of Curaderm-BEC5 in the treatment of BCCs. The primary endpoint was defined as the complete healing of the index lesions, as confirmed by the absence of tumour- determined by clinical and histological examination after 8 weeks of twice daily treatments with Curaderm-BEC5 or placebo. The secondary endpoints were cosmetic evaluation, physician’s global evaluation of response to treatment, assessment of local irritation, reduction in size of the lesion and assessment of the frequency, nature and severity of adverse events.

The success rate (complete remission of skin cancers) of the Curaderm-BEC5 cream was 78% within 8-weeks. Longer than the 8 weeks duration therapy with Curaderm-BEC would have resulted in even higher success rates. These results were comparable to those previously obtained and published (4, 5, 13, 14). Not only was it shown that Curaderm-BEC5 was effective in treating superficial BCC, but in a subsequent open study trial comprising 41 patients (carried out at the Dermatology Department at the Royal London Hospital), it was also shown that Curaderm-BEC5 was effective on morpheoic BCC lesions, which are a type of invasive BCC.

The clinical trial experience has shown that Curaderm-BEC5 is safe. Only local skin irritation, some pain and erythema (reddening) occurred during treatment. Success was defined as zero presence of BCC after histological (microscopic) examination of samples, removed from the lesion sites by punch biopsy.

These Phase III and open studies confirm the previously published articles that; Curaderm-BEC5 is the method of choice for treating non-melanoma skin cancers.

Over 7,000 of the commonly prescribed drugs in the western world are derived from plants. Indeed, the plant kingdom has supplied us with some excellent drugs. Pain sufferers appreciate the relief provided by morphine. Victims of congestive heart failure appreciate the life-saving role of digitoxin or digoxin. Migraine patients experience the dramatic relief effected by ergotamine. Children with leukaemia have recognized the improvement of their condition by treatment with vincristine.

Importantly, in addition, the natural plant drugs have served as useful prototypes for even better medicines. Synthetic chemists have been able to convert morphine to hydro-morphone, lysergic acid to methylsergide, cocaine to procaine, physostigmine to neostigmine and even salicin to aspirin.

The fact that BEC shows such tremendous promise for treating internal cancers and the fact that Curaderm-BEC5 is now regarded as the method of choice for treating skin cancers lead us to conclude that Curaderm-BEC5 is a primary candidate to be added to the acceptable list of commonly prescribed drugs. Whether synthetic chemists will be able to classify BEC as a useful prototype for terminal internal cancers still remains to be seen. 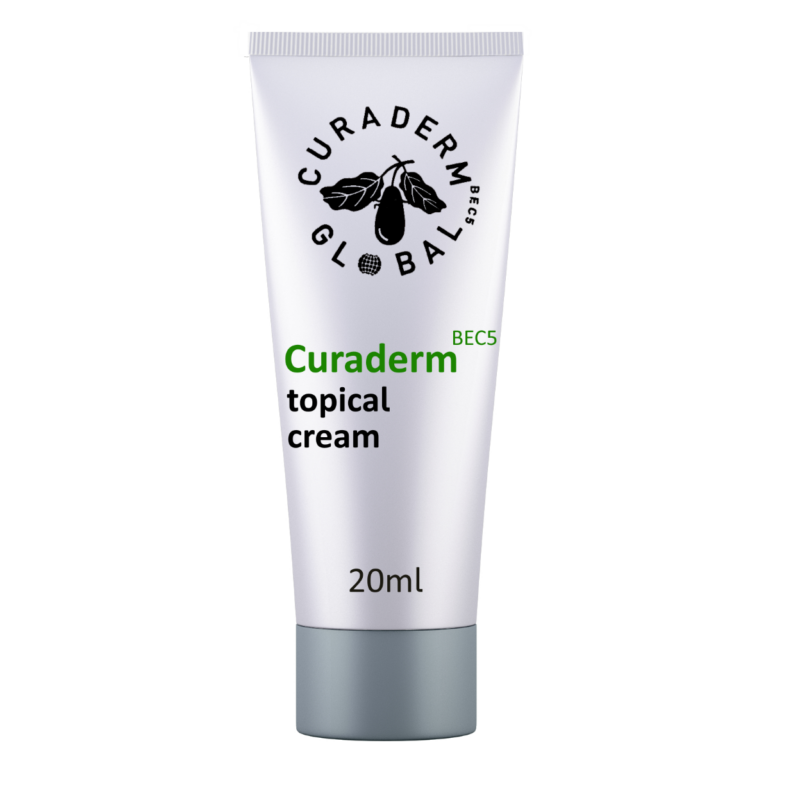