The power of light the Vielight intranasal light therapy

The healing power of light has long been known. But the process of irradiating the blood in one’s body with laser or LED light for therapeutic purposes may sound a bit futuristic, (if not strange!) to most Westerners. Yet, it has been going on in various stages of development for over 30 years–first in Russia, and then in China, where it has made huge strides through knowledge gained from intensive medical research. The original Russian intravenous blood illumination procedure was reworked by Chinese researchers into a non-invasive technology that delivers beneficial light through the nasal cavity and circulates its healing potential throughout the body. Hundreds of clinical studies show that intranasal light therapy not only supports overall health, but treats an array of conditions, from cardiovascular to neurological and immune disorders ─ all while delivering potent antiaging effects. Now, all of the therapeutic potential of this fascinating medical technology has been harnessed into a user-friendly and portable device for personal use, the Vielight®. Let’s examine the health benefits of this amazing innovation.

From intravenous to intranasal to Vielight®: Evolution of the blood illumination method

The original method of blood illumination, developed by Russian researchers in the early 1980’s, involved inserting a canula containing a cable that delivered low level laser light of specific wavelengths directly into the circulating bloodstream through a vein in the forearm, as shown below. 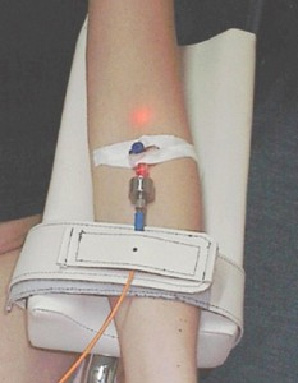 In the 1990’s, Chinese scientists began experimenting with irradiating the bloodstream another way ─ by inserting small low level laser diodes into the nostril, instead of injecting the light into a vein. As shown in figure 2, the nasal cavity contains a rich network of blood vessels and is bathed by considerable blood flow, making it an ideal location for illumination of the bloodstream. 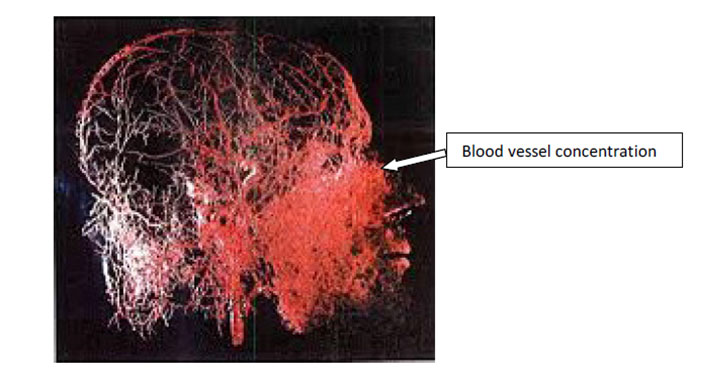 Figure 2: The nasal cavity is rich in vasculature

The technique became known as intranasal low intensity laser therapy (ILILT). Later work also employed non-laser generated light, such as LED (light-emitting diode) and infrared. More recently, the technology was further refined to produce a commercially available version, the Vielight® 633 Red, which comfortably attaches inside of the nostril (Figure 3) and illuminates blood flowing through the nasal cavity with LED-generated low intensity red light at a wavelength of 633 nm. The device is light-weight, portable, and easy to use at home (no doctor’s visit necessary). 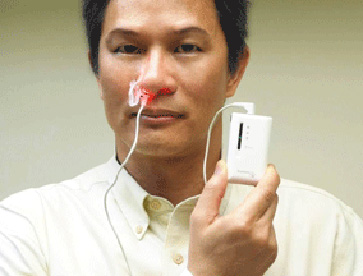 Most of the hundreds of clinical studies on intranasal light therapy (also called intranasal phototherapy; both are general terms which encompass laser and non-laser LED light) have been performed in China, where it is widely used and distributed, with an estimated ten million devices sold. Although the technique is largely unknown in North America and most European countries (perhaps because most of the studies are in Chinese), it is a powerful healing modality that will no doubt gain popularity in the years to come. Let’s take a look first at its mechanisms of action, and then its many applications.

Irradiating the blood with low intensity light to modulate, (i.e., either stimulate or inhibit) biological functions, a process known as photobiomodulation, promotes health and stimulates healing by restoring homeostasis, or internal equilibrium. Homeostasis is a term used to describe the tendency of the body to maintain constant and stable internal conditions by adjusting its physiological processes. This balance is disrupted in cases of disease, and can be re-established through the use of intranasal phototherapy, which circulates its healing effects throughout the body.

Various mechanisms have been proposed for this restorative effect, including the generation of ATP, the cellular “energy currency” that transports chemical energy within cells to support metabolism. Low intensity light also spurs the production of singlet oxygen, a type of ROS (reactive oxygen species). At first glance, it seems that the production of an oxidative compound would be harmful, rather than beneficial to health. But ROS’s generated in a controlled manner at low levels play a part in a variety of essential physiological processes, including a cell signaling pathway known as redox signaling. Through redox signaling, singlet oxygen alerts the body to activate endogenous antioxidants within cells, (1, 2) a process that occurs naturally during illness or physical injury to stimulate the immune system and repair mechanisms, as well as in response to light illumination in the red spectrum. The result is an overall antioxidative effect that exceeds any potential free radical damage by singlet oxygen. In particular, intranasal light therapy, through the process of redox signaling, has been shown to stimulate the production of SOD (superoxide dismutase), (3) an important antioxidant enzyme that may also promote longevity. Low intensity light also improves the redox potential of cells. Without going into too much chemistry, this refers to reactions involving the transfer of electrons between chemical species, in this case the oxidized and reduced forms of the niacin analogs NAD+ (nicotinamide adenine dinucleotide) and NADH. Intranasal light therapy increases the ratio of NAD+/NADH to a more favorable value (3) characteristic of healthy cells. All of these mechanisms – and there are undoubtedly more ─ occur at the cellular level in response to illumination of the nasal cavity, but their benefits are transported in the bloodstream throughout the body for an overall beneficial systemic effect.

It should also be mentioned that, according to traditional Chinese medicine, some of the therapeutic effects of intranasal phototherapy may be mediated through meridians, or channels, that form a network in the body through which qi, or vital energy flows. Any blockage in qi causes pain or illness, and low intensity light may act to restore the flow of vital energy throughout the body.

Now let’s see how the therapy can be applied to treating particular conditions.

Many Russian studies on intranasal phototherapy focus on treating rhinitis (4) and sinusitis, (5) but most of the work in China has been directed to treating cardiovascular, neurological, and immune diseases. These studies all used ILILT with various types of low level lasers to irradiate the nasal cavity. However, it is thought that equivalent results may be obtained using low intensity light from an LED source. According to the manufacturer of the Vielight® 633 Red, a calibrated LED diode will produce the same biological effects as a laser diode. Therefore, the clinical outcomes obtained in the studies below can potentially be achieved with the Vielight®.

ILILT has demonstrated enormous benefits in improving key risk factors of cardiovascular diseases. First, it enhances blood circulation by normalizing red blood cell aggregation (the “sticking” together of red blood cells) and lowering the high blood viscosity that results from the clumped cells. This enables the blood to flow unimpeded, allowing red blood cells to deliver oxygen and nutrients efficiently throughout the body. This is associated with the release of nitric oxide.

ILILT also reduces the high lipid levels associated with vascular diseases. In one of numerous studies on cardiovascular disease, patients with coronary heart disease and stroke who were treated with ILILT significantly improved with treatment: total cholesterol fell by 15%, triglycerides declined by 9.6%, high-density lipoprotein ( “good” cholesterol) rose by 12.1%, low-density lipoprotein (“bad” cholesterol) fell by 9.2%, and both blood viscosity and red blood cell aggregation were lowered. (3) In other studies, ILILT treatment increased cerebral blood flow in stroke patients (6) and myocardial blood flow in heart attack patients. (7) In addition, the positive effect of ILILT on red blood cell aggregation and circulation may lead to lowered blood pressure, which may also be achieved by the light-stimulated release of nitric oxide, a substance that relaxes blood vessel walls.

ILILT is also effective in treating a wide range of neurological conditions. It is a welcome alternative to side-effect-prone sleeping pills for the large proportion of the population who suffer from insomnia. Studies show that ILILT increases serum levels of melatonin, the pineal hormone that regulates sleep, (3, 8) and improves polysomnogram (sleep study) measurements. (9) One study found that ILILT significantly improved sleep in two to four weeks in 82% of patients and without side effects (10) ─ an impressive result that surpasses the track record of most sleeping pills!

Alzheimer’s is another disease that is often not sufficiently improved by drugs, and is a good indication for intranasal light therapy. ILILT has been shown to decrease levels of blood amyloid beta, (11) the main component of plaques in the brain, and increase scores in a test of memory. (12) ILILT also shows potential in treating Parkinson’s disease. Parkinson’s is a major neurodegenerative disorder characterized by a progressive loss of dopaminergic neurons in the substantia nigra portion of the brain. One study on Parkinson’s patients found that treatment with ILILT returned a marker of cognitive decline to normal levels and improved symptoms in 86% of patients, (13) a finding that was corroborated by another study. (14) In patients with schizophrenia, ILILT was found to potentiate the effect of medication by quickening its onset. (15) ILILT also exhibits pronounced analgesic effects. In patients with chronic headache, migraine, or trigeminal neuralgia, ILILT improved symptoms in 90% of cases and increased blood levels of β endorphin, (16, 17) a brain chemical with greater analgesic potency than morphine. ILILT also has applications in treating diabetic neuropathy, where it has been shown to enhance the effect of drugs. (18)

In addition, intranasal light therapy has immune-enhancing effects and may potentially be used to treat illnesses ranging from influenza to cancer. Further research will undoubtedly reveal additional applications of this powerful medical technology. But perhaps one of its most compelling features is its impact on longevity.

According to the free radical theory of aging, oxidative stress is a primary cause of aging due to the accumulation of DNA, tissue, and organ damage over time. We saw earlier that low intensity light enhances the production of SOD and combats deleterious oxidative reactions. It follows that by restoring oxidant-antioxidant homeostasis, intranasal phototherapy may extend lifespan. We also saw that light stimulation boosts the redox potential of cells, with an increase in the ratio of NAD+/NADH. A boost in NAD+ may lead to higher activity of the sirtuins (SIRT’s), a family of enzymes with key roles in metabolic homeostasis and life span regulation. (19) Also, as mentioned earlier in reference to insomnia, intranasal light therapy increases production of melatonin, a hormone that typically declines with age. Besides its sleep-enhancing effects, the hormone has been shown to prevent premature aging and increase life span, (20) at least in part as a result of its antioxidant and anticarcinogenic actions. All of these factors contribute to the potent anti-aging effects of intranasal light therapy.

It’s now clear that intranasal light therapy is a powerful healing modality that acts through a variety of mechanisms to rebalance the body’s physiology and restore homeostasis. It not only treats a wide spectrum of diseases, but safely promotes overall health, in contrast to the side-effects, toxicity, and lack of efficacy associated with many drugs. The good news is that this innovative technology has been condensed down to a hand-held, portable device, the Vielight® 633 Red, for home use. The nose-clip applicator fits comfortably on either nostril and delivers therapeutic LED red light at 633 nm for 25 minutes, after which it automatically shuts off, so it can conveniently be used when reading, working, watching TV, even napping. What’s more, it’s affordable ─ a modest one-time cost that will enhance your health for a lifetime.